skip to main | skip to sidebar

I'm so tired of this late, dreich spring and doing nothing in my garden except hacking back overgrown creepers and sweeping up birch twigs fallen in the gales that a jaunt to other people's gardens and a Tulip Festival seemed very attractive.


Inside the walled garden of Cambo House (near St Andrews, in Fife) tulips were laid out in an enormous potager - a flower-bed - which displayed the full extravagance and gloriousness of tulips, which I liked so much better than those in rows. They had  both to suit all tastes.  Also some tulips planted amongst grass borders mixed with daffodils for a charming casual, wild effect.

What a pity the late spring and drizzly weather has kept people away - thinking the tulips had not opened maybe, or just put off by the prospect of getting wet.  My friend and I and a handful of others had this wonderful display to ourselves on the Saturday (the 11th). Only a little drizzle in fits and starts. I just hope more people turned up on the following day.  It would be such a shame if this festival did not run in future years.  I was told that 'Friends' of Cambo can buy the tulips on the last day for a knock-down price - mainly because there's no guarantee they will flower well or at all the next year but worth a gamble surely?! (Not quite the  Tulipomania of the 17th c Dutch who went bankrupt gambling on tulip futures.)

Here are some of my favourites:

This beauty is white with a green flush but when I googled it I discovered it surprises on opening to reveal
white striped with scarlet in peony cup-shaped flowers.

My question mark is because the planting was not labelled, so I've had to google them and am not sure I've got it right. Anyway - wonderful combination of colours.  Underplanted with forget-me-nots in places which is a great idea I will knick for my garden. 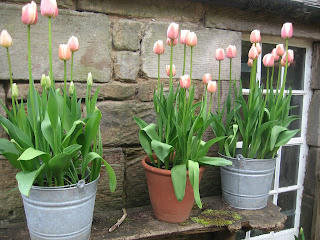 No one knows?  The gardener's favourites outside the potting shed.

Away from the enclosed garden, we wandered down a path and past a  potting shed.  I think I liked these best - the surprise of coming across them unexpectedly, the attractive grey of the tin buckets complementing the pink flowers and the fact that none of the staff seemed to know what the tulips are called.  Only that this display was the gardener's favourites.

Cambo House is a lovely mixture of country house (not open to the public) and informality.  Not so large it's impersonal.  But plenty to see  - not only tulips, but swathes of daffodils in the fields approaching the house. More than flowers too: a horse with four legs, which as it passed I saw was a mother accompanied by her foal, and some Saddleback pigs  with a pink strip behind their shoulders, looking surprisingly clean (seemingly possible).

There's a walk alongside a stream that leads to the North Sea but as rain was coming on, we decided to leave that for another time.  BTW, I loved the statues cavorting on the enclosed  garden walls.
What is a garden without statues, especially those with a sense of humour? 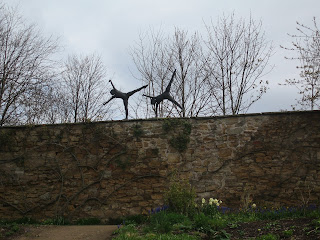 Posted by Stephanie Green at 13:01 No comments:

http://www.villa-ephrussi.com/en/ephrussi/776-videos/19-musical_fontains/
Posted by Stephanie Green at 14:24 No comments:

An occasional photo/journal of visits to other people's gardens: stately homes' gardens, public gardens, sculpture parks, wild open spaces, tiny secret gardens etc. Since my own wee urban garden is so small, I have to get my kicks out and about.

This site is prone to procrastination, mid-life crises, hibernation and other excuses for not getting down to uploading plethora of photos. Bear with, as Miranda's friend would say.

Meanwhile, check out my other more up-to-date blog about my urban garden in Edinburgh: 'State of the Garden'.

Stephanie Green
I am a poet, writer, creative writing tutor and Theatre and Dance critic. http://sites.google.com/site/stephgreen1/home

Favourite Books on Other People's Gardens